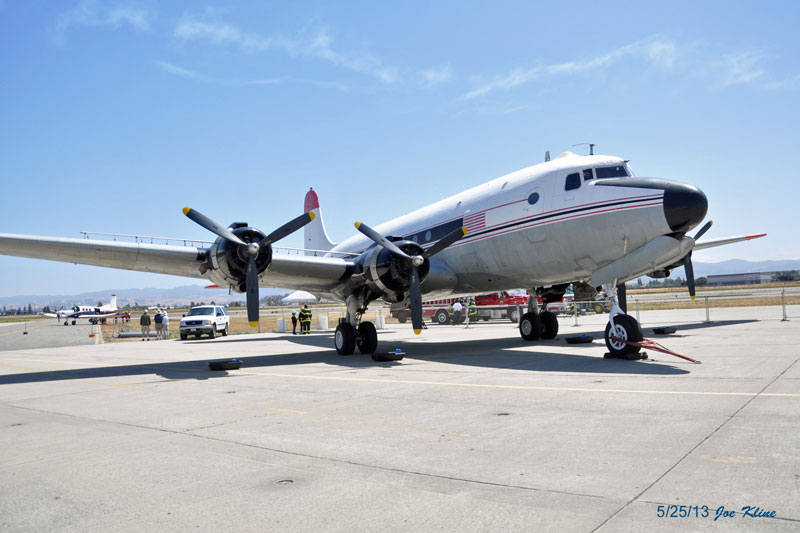 The Douglas DC-4 is a four-engine, propeller-driven aircraft developed by the Douglas Aircraft Company.  It served during World War II but most known for its participation in the Berlin Airlift.

After World War II, the Allies partitioned the defeated Germany into a Soviet-occupied zone, an American-occupied zone, a British-occupied zone and a French-occupied zone. Berlin, the German capital city, was located deep in the Soviet zone, but it was also divided into four sections. In June 1948, the Russians–who wanted Berlin all for themselves–closed all highways, railroads and canals from western-occupied Germany into western-occupied Berlin. This, they believed, would make it impossible for the people who lived there to get food or any other supplies and would eventually drive Britain, France and the U.S. out of the city for good. Instead of retreating from West Berlin, however, the U.S. and its allies decided to supply their sectors of the city from the air.

This effort, known as the “Berlin Airlift,” lasted for more than a year and carried more than 2.3 million tons of cargo into West Berlin.  The Douglas DC-4 played an important role in this allied effort.  The DC-4 remained in service well into the 1960s in a military role. From 1945, many civil airlines operated it worldwide. 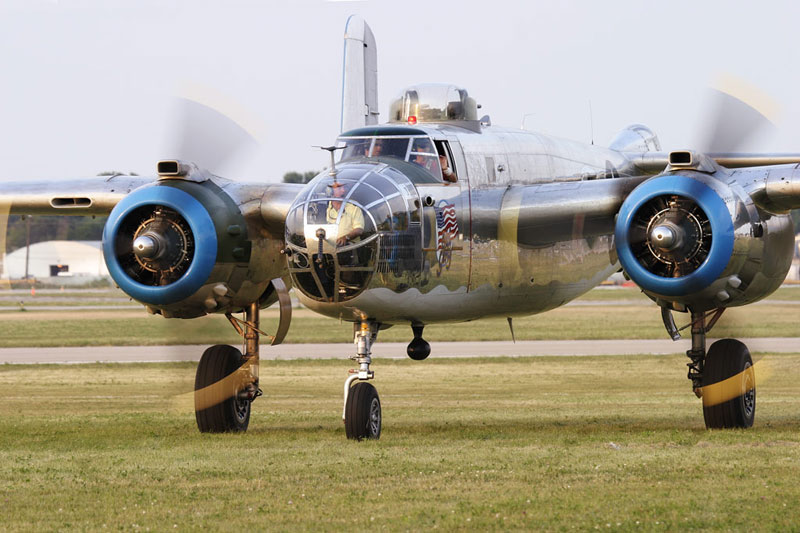 The North American B-25 Mitchell was an American twin-engine, medium bomber manufactured by North American Aviation. It was used by many Allied air forces, in every theater of World War II, as well as many other air forces after the war ended, and saw service across four decades. The B-25 was named in honor of General Billy Mitchell, a pioneer of U.S. military aviation. By the end of its production, nearly 10,000 B-25s in numerous models had been built. These included a few limited variations, such as the United States Navy‘s and Marine Corps‘ PBJ-1 patrol bomber and the United States Army Air Forces‘ F-10 photo reconnaissance aircraft.

The B-25 first gained fame as the bomber used in the 18 April 1942 Doolittle Raid, in which 16 B-25Bs led by Lieutenant Colonel Jimmy Doolittle attacked mainland Japan, four months after the bombing of Pearl Harbor. The mission gave a much-needed lift in spirits to the Americans, and alarmed the Japanese who had believed their home islands were inviolable by enemy forces. Although the amount of actual damage done was relatively minor, it forced the Japanese to divert troops for the home defense for the remainder of the war.

The raiders took off from the carrier USS Hornet and successfully bombed Tokyo and four other Japanese cities without loss. Fifteen of the bombers subsequently crash-landed en route to recovery fields in Eastern China. These losses were the result of the task force being spotted by a Japanese vessel forcing the bombers to take off 170 mi (270 km) early, fuel exhaustion, stormy nighttime conditions with zero visibility, and lack of electronic homing aids at the recovery bases. Only one B-25 bomber landed intact, in Siberia where its five-man crew was interned and the aircraft confiscated. Of the 80 aircrew, 69 survived their historic mission and eventually made it back to American lines.

Following a number of additional modifications, including the addition of Plexiglas windows for the navigator and radio operator, heavier nose armament, and de-icing and anti-icing equipment, the B-25C was released to the Army. This was the second mass-produced version of the Mitchell, the first being the lightly armed B-25B used by the Doolittle Raiders. The B-25C and B-25D differed only in location of manufacture: -Cs at Inglewood, California, -Ds at Kansas City, Kansas. A total of 3,915 B-25Cs and -Ds were built by North American during World War II.

Although the B-25 was originally designed to bomb from medium altitudes in level flight, it was used frequently in the Southwest Pacific theater on treetop-level strafing and parafrag (parachute-retarded fragmentation bombs) missions against Japanese airfields in New Guinea and the Philippines. These heavily armed Mitchells, field-modified at Townsville, Australia, by Major Paul I. “Pappy” Gunn and North American tech rep Jack Fox, were also used on strafing and skip-bombing missions against Japanese shipping trying to resupply their land-based armies.Under the leadership of Lieutenant General George C. Kenney, B-25s of the Fifth and Thirteenth Air Forces devastated Japanese targets in the Southwest Pacific theater from 1942 to 1945, and played a significant role in pushing the Japanese back to their home islands. 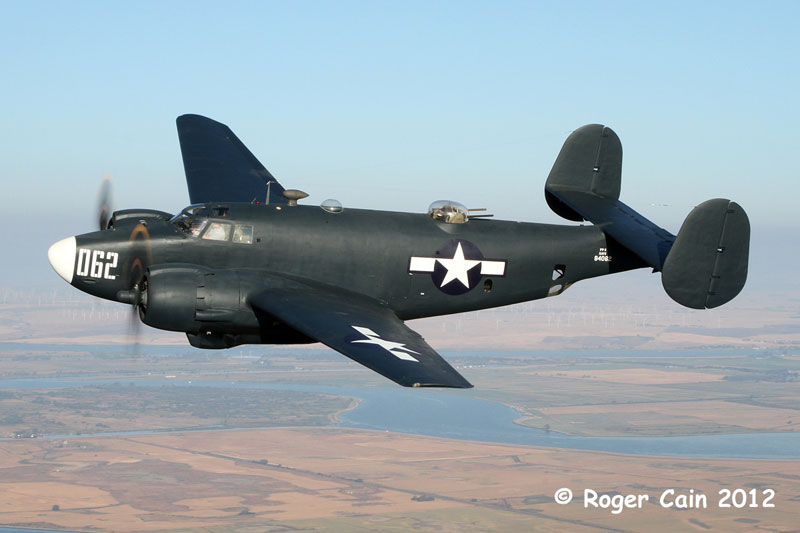 In June of 1943, the United States ordered 500 aircraft under the designation PV-2 and the name Harpoon was assigned.  Made by Lockheed Aircraft for a reconnaissance role, the PV-2 Harpoon included two Pratt & Whitney R-2800 air-cooled radial engines with a max speed at 13,700 feet was 282 mph; Sea-level cruising speed was 271mph.  The Harpoon’s climb rate was 1,630 fpm with a service ceiling of 23,900 feet.

The PV-2 Harpoon was first taken into combat in March of 1945.  The aircraft went through several revisions and became the PV-2D.  Only thirty-five PV-2D aircraft were delivered and equipped for an invasion on Japan.  The D models included eight fixed .50 caliber machine guns instead of the earlier model’s five.  Due to the delays from model revision, its service was cut short by the end of WWII in the Pacific and the PV-2D did not deploy in this role.  The US Navy continued use of the PV-2 for several years and the Harpoon was eventually phased out of Military service in August of 1948. 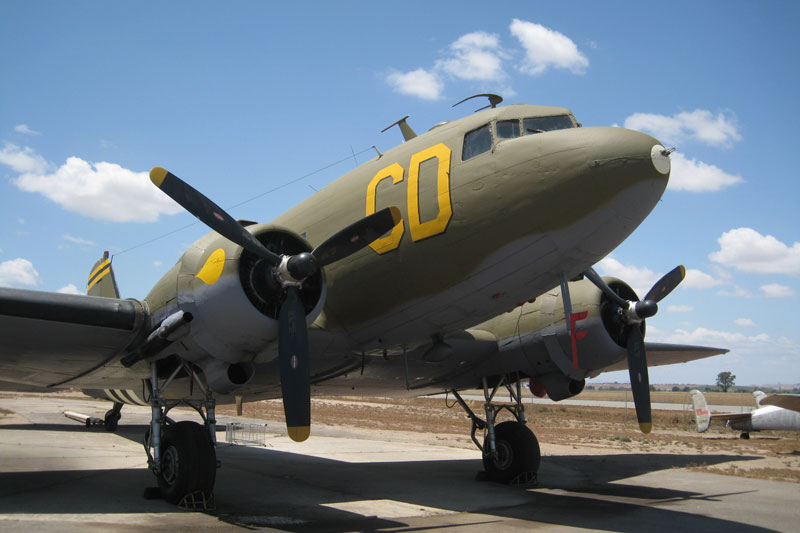 Few aircraft are as well known, were so widely used or used as long as the C-47. Affectionately nicknamed the “Gooney Bird,” this aircraft was adapted from the Douglas DC-3 commercial airliner. The U.S. Army Air Corps ordered its first C-47s in 1940, and by the end of World War II, procured a total of 9,348. These C-47s carried personnel and cargo around the globe. They also towed troop-carrying gliders, dropped paratroops into enemy territory, and air evacuated sick or wounded patients. A C-47 could carry 28 passengers, 18-22 fully equipped paratroopers, about 6,000 lbs. of cargo or 18 stretchers and three medical personnel.

After World War II, many C-47s remained in U.S. Air Force service, participating in the Berlin Airlift and other peacetime activities. During the Korean War, C-47s hauled supplies, dropped paratroops, evacuated wounded, and dropped flares for night bombing attacks. In the Southeast Asia War, the C-47 served again as a transport, but it also flew a variety of other missions, including ground attack as gunships, reconnaissance, and psychological warfare.