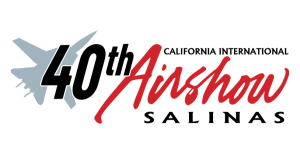 February 14, 2020, — Salinas, CA— the skies over Salinas will come alive with the sights and sounds of planes, Robosaurus, the Wall of Fire and a spectacular firework show at the Airshow’s FIRST Friday night show in 10 years!  Looking for a great venue to watch the Friday night show? The Airshow is offering a special venue for adults called Maverick’s Lounge, an all-inclusive venue with seating food and a hosted bar for only $150.00 per person.

Saturday and Sunday’s show will feature the U,S, Navy’s F-35c, Greg Colyer in his Ace Maker T-33, John Melby and his Fear Boss Pitts S-1-11B, Tom Larkin in his Mini-Jet, Steve Stavrakis with a tribute to the American Vet, the Wall of Fire, Robosaurus and the Smoke n’ Thunder Jet Truck and of course, the U.S. Air Force Thunderbirds!

Tickets go on sale February 15th  and can be purchased at the Airshow office at 30 Mortensen Ave. at the Salinas Airport and on the Salinas Airshow website www.salinasairshow.com or on-line at ticketfly.com.