Aerobatic Pilot Overcomes Cancer Threat to return to the Cockpit 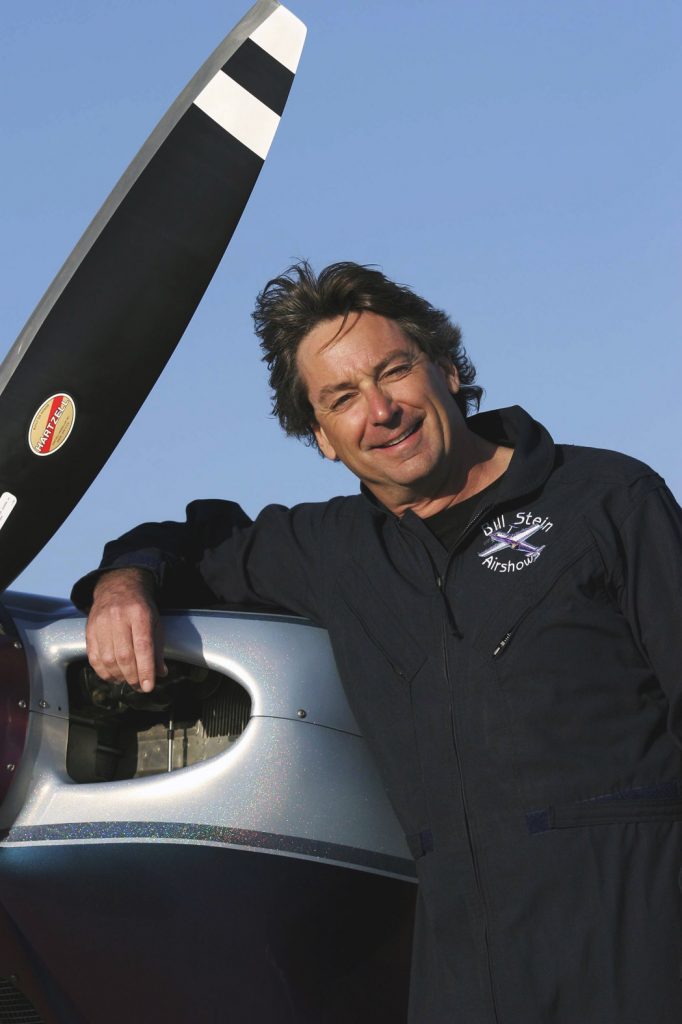 One could argue that Antioch-based aerobatic pilot Bill Stein is no stranger to fear and anxiety. After all, he makes a living out of tumbling and somersaulting through the air — seemingly out of control — in a high performance stunt plane, thrilling millions of air show fans every year.

“You learn to manage your fear. If you don’t bad things can happen. You learn to trust in your aircraft and your training,” said Stein, 60, who is one of the headline acts at this year’s California International Airshow Salinas Sept. 31-Oct. 1 at the Salinas Municipal Airport.

In 2008, however, doctors delivered a shocking message: He had late stage colorectal cancer and was very ill.

“When your doctor gives you a diagnosis like that it tends to concentrate your attention and focus,” Stein said. But Stein, widely known for his brand of self-deprecating humor, didn’t allow himself to get down about his cancer. Instead, he immediately jumped into an aggressive regimen to fight the cancer including extensive and exhausting chemotherapy treatments.

A year later those same doctors who delivered the original disturbing news now deemed him disease free. Stein adds that his yearly checkups since then have happily continued to show him cancer free.

“I had a choice to make. I could go back to my former tech and software development work and a slower lifestyle or I could return to flying. I chose flying and haven’t looked back since,” Stein said. Although a recognized expert in air show formation flying, Stein will fly his sleek Zivko Edge 540 monoplane, a purpose-built, high-tech, carbon fiber-constructed monster of an aircraft.

The Zivko has a “roll rate” of more than 420 degrees a second and can climb at a staggering rate of some 3,800 feet per minute — both features allow Stein to do the amazing aerial maneuvers he does in his routine. Even the look of Stein’s Zivko is unique. Using cutting edge paint technology, Stein had his aircraft sport a paint job that continuously changes color based on the constantly varying angles between the spectators, the airplane and the sunlight.

The airplane will actually change color from green to purple to blue along with gold, yellow, pink and orange depending on the angle of the light and the perspective of the viewer. Beside his consummate piloting skills Stein carries the respect of the air show industry because of the time he has put into making airshows safer for both fans and performers. Stein has put in hundreds of hours working with the industry association and the Federal Aviation Administration in the role of aerobatic competency evaluator.

Bruce Adams, the Monterey-based executive director of the Salinas Airshow, said he was pleased to sign Stein to perform at this year’s show.

“Bill Stein is the consummate aerobatic pilot and a great showman. He is a high-energy performer who takes the 540 to the edge of its capability while he maintains complete control of the physics of his aerobatic maneuvers. He is a crowd favorite and accomplished artist in the air. We are thrilled to have him,” Adams said.

For his part Stein, who has flown the Salinas show once before, says he excited to return to the non-profit show that is produced by community volunteers and which has donated $8 million to local charities over the years. “Everyone in the business understands that Salinas is a very special show. The Salinas fans are among the most knowledgeable and enthusiastic. It’s a pleasure performing for them,” Stein said.