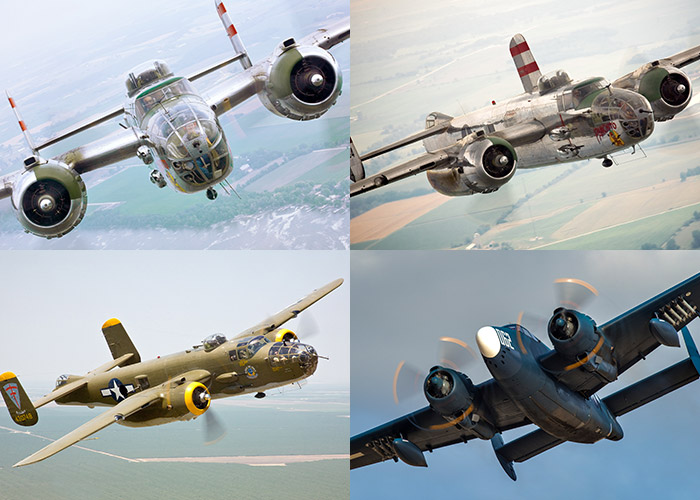 The North American B-25 Mitchell, a twin-engine medium-range bomber that became standard equipment for the Allied air forces in World War II, was perhaps the most versatile aircraft of the war. It became the most heavily armed airplane in the world, was used for high- and low-level bombing, strafing, photoreconnaissance, submarine patrol, and even as a fighter.

It required 8,500 original drawings and 195,000 engineering man-hours to produce the first one, but nearly 10,000 were produced from late 1939, when the contract was awarded to North American Aviation, through 1945.

The B-25 is most often recognized by its 1942 raid when LTC James “Jimmy” Doolittle led  his squadron of sixteen B-25 Mitchell’s from the deck of US carrier Hornet and delivered the first air strike on Tokyo, Japan.

From 1942 to 1945, the Grumman Avenger was the main torpedo bomber used in the Pacific during World War II. A navy aircraft, it was both carrier and land based.

With a crew of three, the pilot, bombardier-gunner, and radio operator-gunner, the improved TBF-1C version was equipped with two wing-mounted .50 caliber machine guns, a .50 caliber in the rear turret, and one .30 caliber machine gun ventral machine guns. The deep fuselage allowed an internal bomb bay in which the Avenger could carry a bomb load of up to 2,000 lb. of bombs, torpedoes or rockets in various combinations. 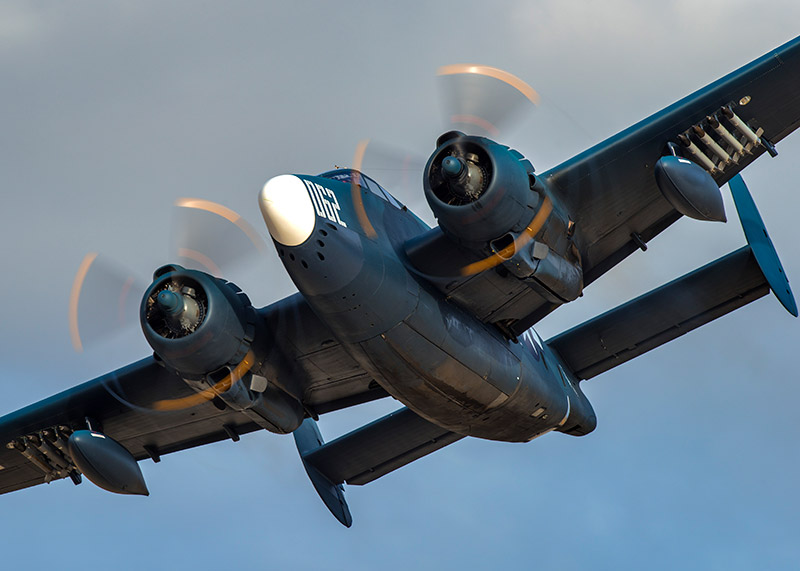 The Lockheed PV-2 Harpoon was a major redesign of the PV-1 Ventura to optimize it for the WWII Pacific Theater maritime anti-submarine reconnaissance role.

The first Harpoon took off on its maiden flight on December 3, 1943. Bud Martin was the crew captain. Early tests indicated a tendency for the wings to wrinkle dangerously. A quick modification involving a 6-foot reduction in wingspan to obtain a uniformly flexible wing did not cure the problem, and Lockheed was forced to carry out a complete wing redesign, which delayed the entrance of the Harpoon into service. In the meantime, the first 30 PV-2s (BuNos 37035/37064) had already been delivered with the original defective wings and were designated PV-2C. Because of difficulties in sealing the integral fuel tank, these planes were assigned to training duties with the outer wing tanks sealed off. Only 69 PV-2s were accepted by the Navy by the end of 1944 because of the need for the wing redesign.

Once the wing problems had been fixed, the Harpoon turned out to be a thoroughly reliable and popular aircraft. The PV-2 was taken into combat for the first time in March of 1945.  The combat use of the Harpoon by the Navy was fairly brief, and was cut short by the end of the war in the Pacific. The Navy continued to use the Harpoon years after the war was over.

The first model of the “Kate” was the B5N1, and it had its operational debut during the conflict in China. It was used both as a torpedo plane and as a conventional bomber.

The second version was the B5N2, which began its combat career at Pearl Harbor, when 144 of these planes took part in the attack. It proved to be Japan’s best carrier-based torpedo bomber until 1944, when it was replaced.

The Nakajima B5N1 carrier based Torpedo Bomber was designed in 1935 by a Nakajima design team under the supervision of Katsuji Nakamura and went into production as the Navy Type 97 Model 1 attack bomber in 1937.  It was soon discovered that it was extremely vulnerable to any modern fighter aircraft, so by 1939 the B5N2 was designed and put into production. By the outbreak of the war, even the B5N2 was considered obsolete; yet still an effective torpedo attack aircraft.

The Nakajima Kate is one of the aircraft types that bombed and torpedoed ships at Pearl Harbor on the morning of December 7, 1941.  The California International Airshow Salinas welcomes back this aircraft that was built for the 2001 film “Pearl Harbor” with an all-star cast of Ben Affleck, Josh Hartnett, Kate Beckinsale, Alec Baldwin, Cuba Gooding and Dan Aykroyd.