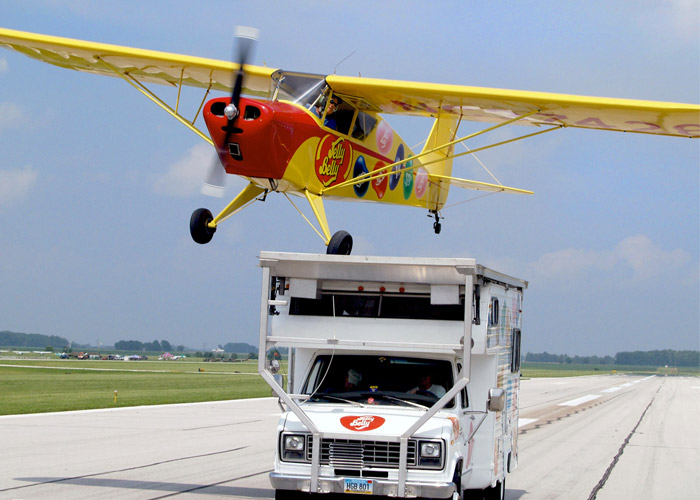 Kent Pietsch fell in love with flying when he was four years-old. Five decades later, his passion has not changed.

Since 1973, Kent has performed his incredible aerobatic routines for millions of people at more than 400 shows that have taken him to quality venues throughout the United States.

Kent grew up in Minot, North Dakota, where every day after school, he’d find a way to get to the airport, and do whatever it took to get into an airplane.

While most aerobatic performers have one basic program, Kent executes three storied acts that leave spectators mesmerized. These include a dead-stick (turning the engine off) routine from 6,000 feet and a rooftop landing on a moving RV! However, Kent is best known for a comedy act that features a detached aileron (wing flap) and a mesmerizing wingtip-scraping pass down the runway that you must see to believe. When Kent is at the controls of his plane, it is impossible not to watch him perform.

Kent loves to fly, but the audience is always his number-one priority. “If you can’t entertain, you have no business being out there,” he said. “The gratification is in knowing that people are enjoying themselves.” Kent’s humble nature and willingness to interact with fans make him a crowd favorite wherever he performs.

At the 2017 California International Airshow, Kent will fly his 800-pound Interstate Cadet that is sure to keep all eyes on his amazing performance.