Anthony Oshinuga and the Pitts Special 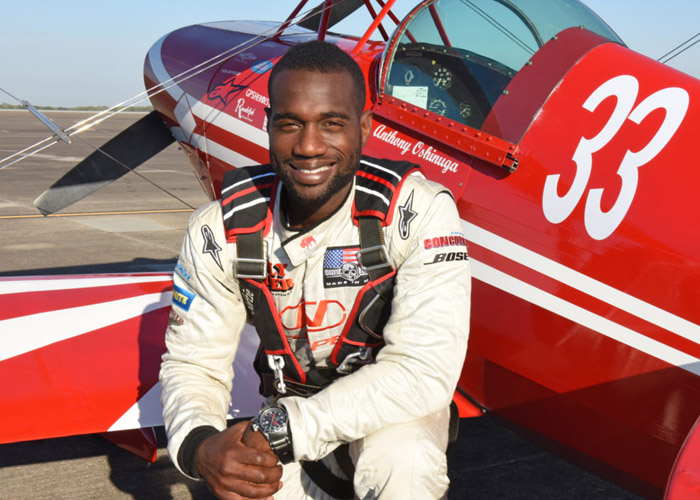 Anthony Oshinuga has dreams. “Never give up. There will be naysayers. If you are passionate and consistent, doors will open. They have to,” he tells students at high schools in the region. Oshinuga follows his own advice, never giving up on his dream to fly on the aerobatic main stage. His quest for the gold, though, has taken its toll on the 34-year-old mechanical engineer. He’s chucked a couple of good jobs in the pharmaceutical world to pursue his flying dreams. The vineyard sightseeing flights in the 1949 Cessna 170A help cover some costs. His Pitts S1-S has been in the shop for months, getting work done on its wings; the time off killing his G tolerance.

Oshinuga is used to challenges: “I grew up poor.” He saved lunch money to buy paint for the radio-controlled airplane kit his dad bought him. “Nothing was ever given to me. I had to work for it,” he says. He was inspired by Top Gun at age 12, but his mother immediately shut him down when he declared he was going to be a fighter pilot. “She said, ‘I don’t want my son g

oing out there and killing anybody and I don’t want my son getting killed.’ I was heartbroken.”

His Nigerian-born parents encouraged his education, though. A partial basketball scholarship was his ticket to a mechanical engineering degree and, ultimately, a job that allowed him to earn a private pilot certificate in 2010. A few aerobatic lessons and a glimpse of the Red Bull Air Races that same year further stirred his passion.